The Suzuki RGV250 VJ21 and VJ22 were leaders in the 250cc race replica scene outside of Japan in the late eighties and early nineties. However, by the end of 1996, the VJ22 had become a little long in the tooth and was in serious need of an upgrade. Step forward, the RGV250 VJ23! Unlike in 1991 when Suzuki unveiled the VJ22, which was a development of its predecessor, the VJ23 shares nothing in common but the RGV name and the engine capacity with it’s older siblings.

TYGA has had a few VJ21’s and 22’s over the years, but never a VJ23, so when the opportunity arose to own one, we snapped it up. However, first riding impressions were; “Where’s this big horsepower that they speak of????” Indeed, a lovely bike to ride from an ergonomic point of view, but seriously lacking in mojo. So a plan was made, and after a couple of days on our dyno, here are the things required to turn the rather lethargic VJ23 into a bit of a hooligan.

Anyway, moving swiftly on. Here are the final results: 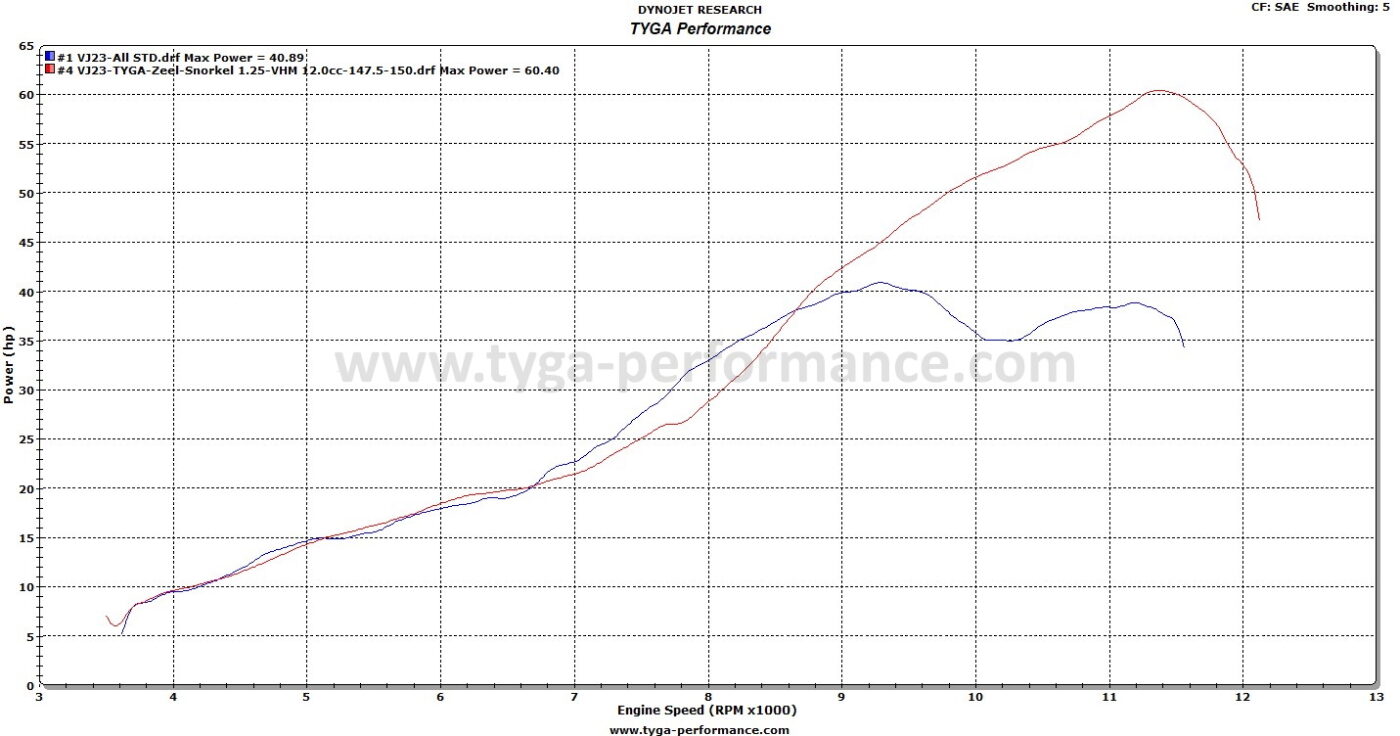 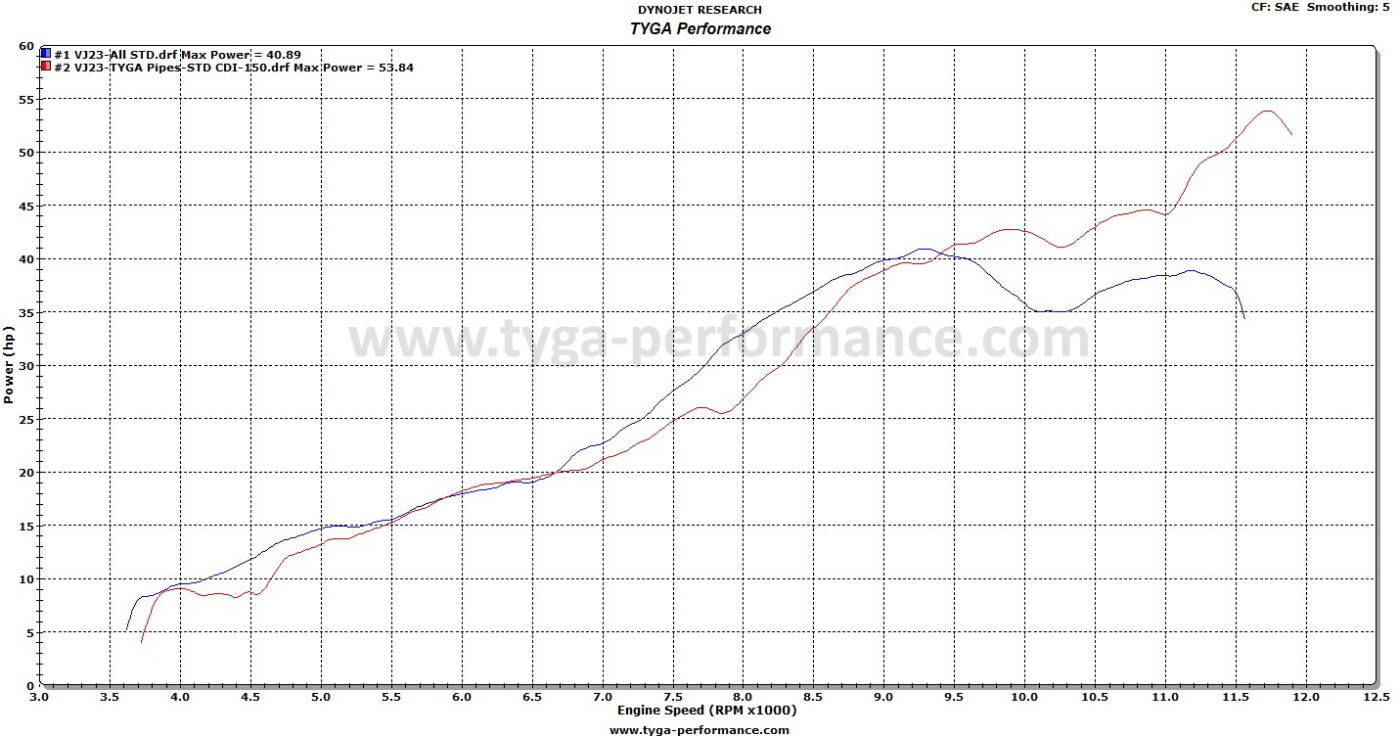 As is usual on these 90’s 250cc strokers, the standard expansion chambers are a major choke point in the quest for power. So the first job was to fit TYGA pipes. This gave a clear indication that the stock chambers were designed for Tokyo traffic, and not the open road. Main jets #150:

So it seems that the VJ23 has it’s horsepower stifled but not only the pipes, but also a snorkel in the air box. However, by just removing the snorkel the carburation went all over the place. And while I’m sure that it could be dialled in (eventually), it seemed that a better option was to try and let a little more air into the air box, but in a controlled manner. So I designed and 3D printed a new, larger snorkel. So this snorkel, and TYGA expansion chambers yielded a nice little improvement. Main jets stayed at #150: 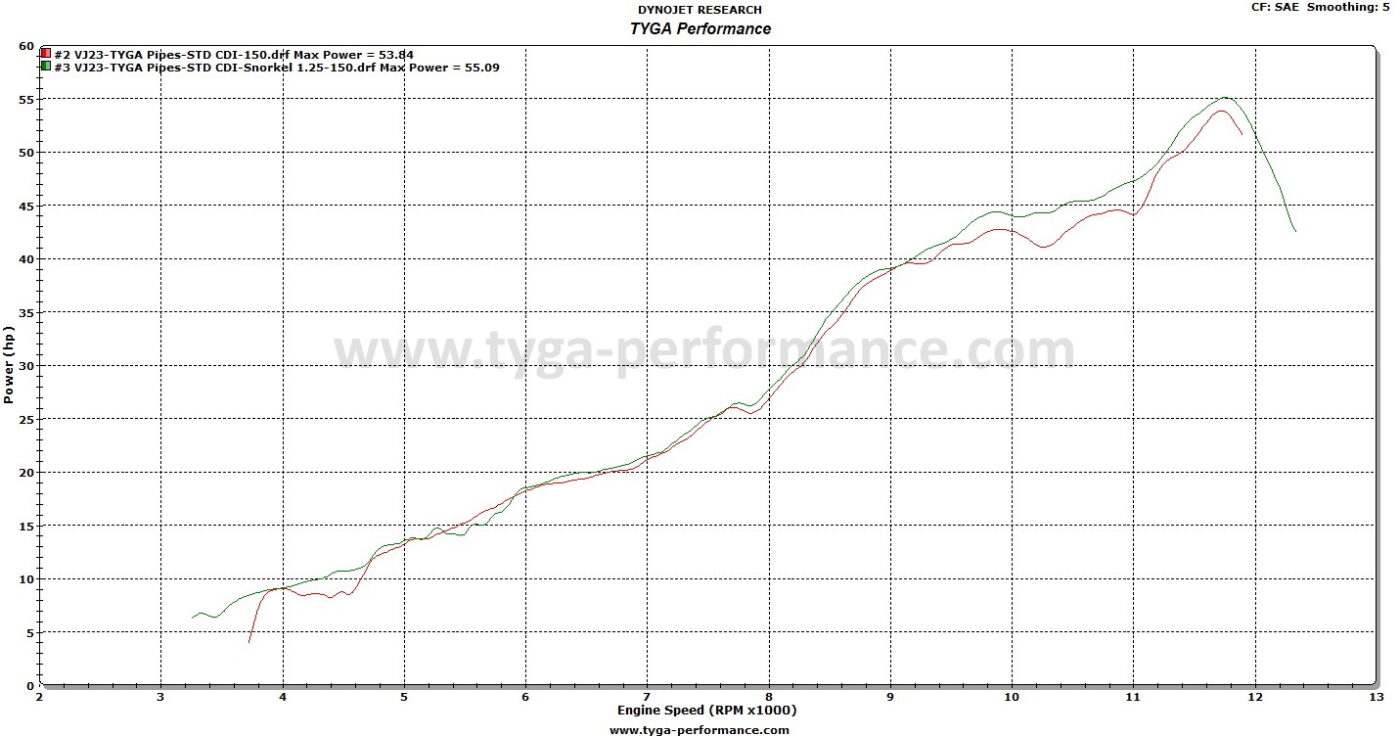 However, as you can see, while the peak hp shoots up by around 15 ponies compared to the stock bike, the power delivery is not the best. After several other configurations we deduced that the CDI was to blame and moved to the next step.

The standard CDI was removed and a Zeeltronic PDCI-VJ23 unit was fitted. No adjustments were made to the standard ignition/Exhaust valve map. The graph suddenly became very encouraging, and certainly pointed the finger of blame towards the stock CDI. Mains #150: 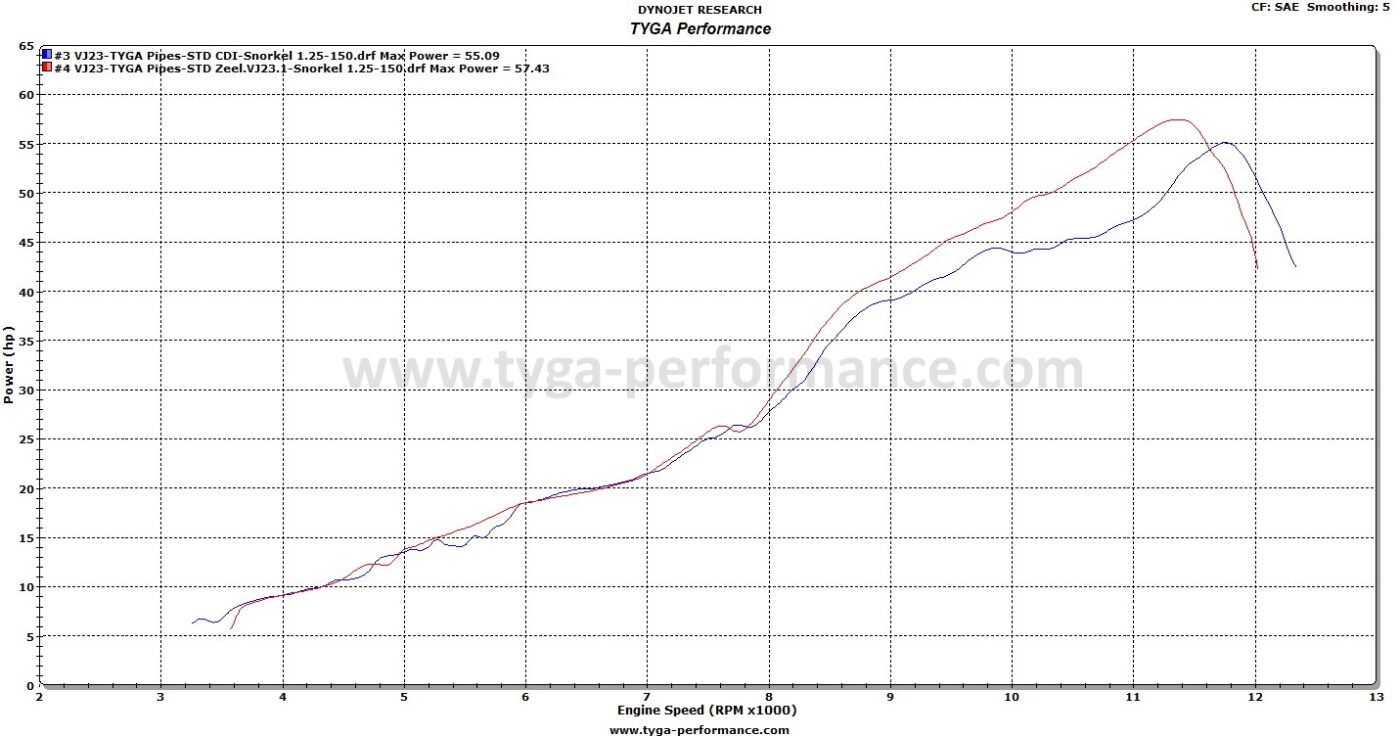 It was plainly obvious now that the Zeeltronic was the way forward, so I couldn’t resist some tweaking of the ignition and exhaust maps, which added a good chunk all the way over the top. Main jets still happy at #150, but couldn’t seem to crack that elusive 60hp mark: 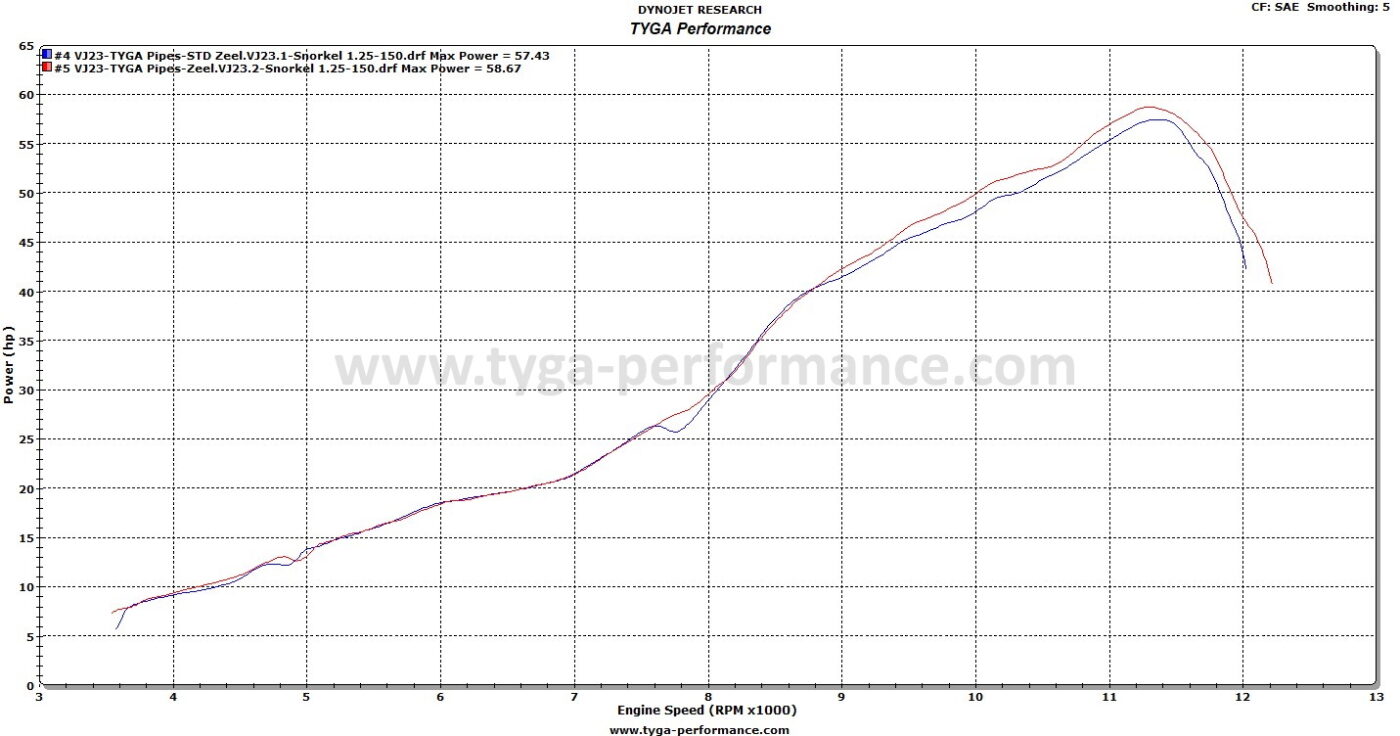 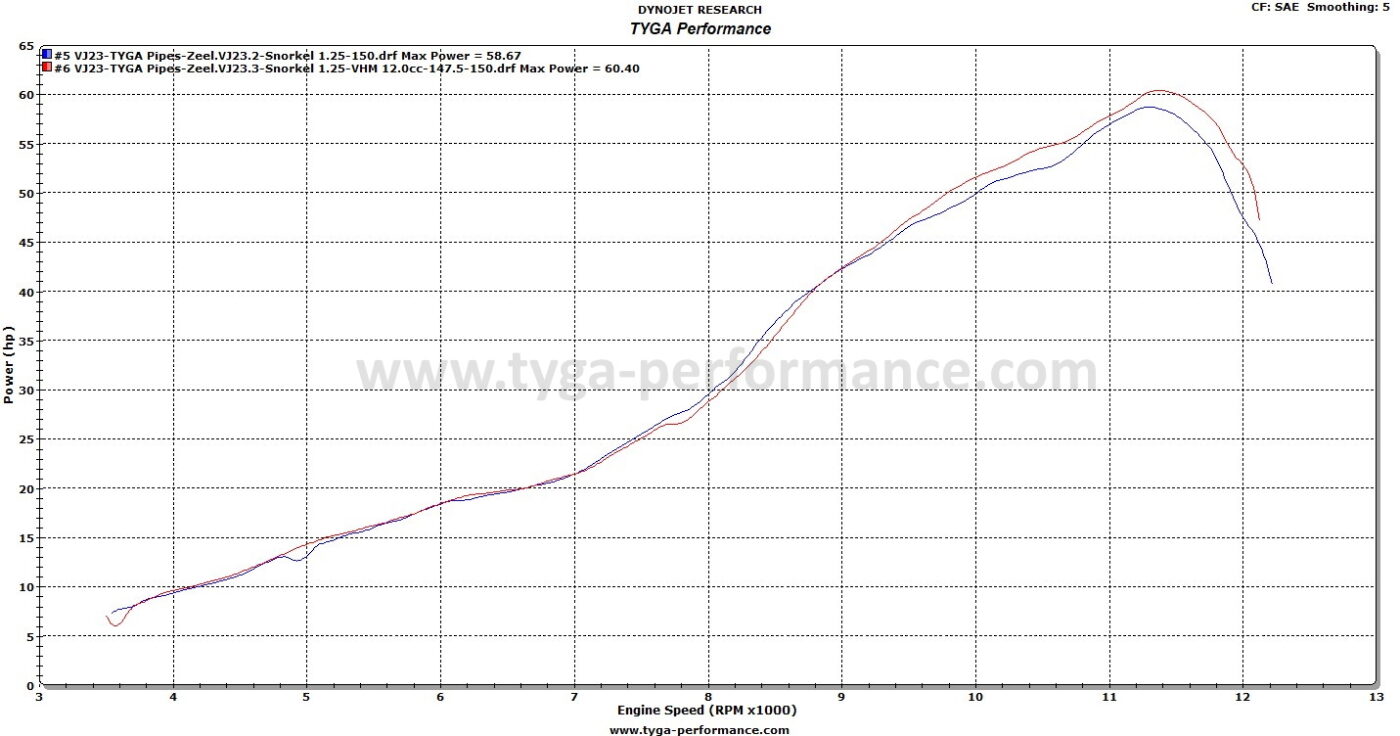 Leading up to our VJ23 developments, we had been in discussions with VHM regarding cylinder heads for this bike, and they sent us a bunch to test. The results were very surprising, and plainly showed the difference between a mass produced cast head and a well developed head. Shown below is the same parts fitted as above, but with the addition of 12.0cc heads and a little more optimisation of the Zeeltronic map. This time we had a very slight improvement by staggering the jetting at #147.5 / #150:

So there you have it. I think that you’ll agree that there’s really no reason (other than resale value perhaps) to leave your beloved VJ23 standard.

TYGA pipes and snorkel on an otherwise stock machine give a big hp jump, but only at the very top. However, considering the fact that the Zeeltronic unit is readily available then it seems pretty obvious that it’s well worth the extra money spent for the big boost in power.

For the final attack, once again those clever chaps at VHM have showed just how good they are at designing cylinder heads. They’re simple to fit, look fantastic and can be quickly tuned for different fuels by swapping inserts.

Concerning the Zeeltronic, the “as delivered” map is fine and works well, but as you can see above, a bit of a tweak certainly doesn’t hurt, and we’re happy to provide the relevant maps with any purchase of pipes.

Remember, modifying your bike puts extra stress on all components, increasing the chance of failure and reducing the lifespan of everything from the piston rings to the sprockets. It may also make your bike illegal for road use! We advise that the base machine must be in good working condition before any changes are made, and careful jet setting should be performed at each stage.

Many thanks to the following:

VHM, for supplying test parts and trusting TYGA with their VJ23 development.

Zeeltronic, for putting up with my questions day after day.