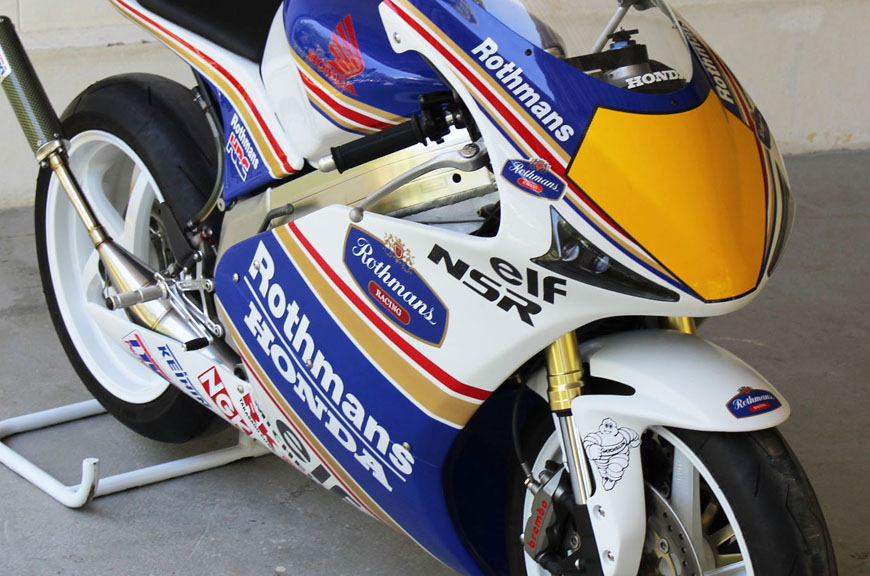 The Honda NSR250R is a special machine. When the 249cc, two-stroke, 90° v-twin GP bike with lights first hit the streets of Japan, it cost roughly $7,500 in hard-earned American dollars — a tidy sum back then, especially for a 300 lbs machine that made 40hp stock.
A coveted item for motorcycle collectors and discerning track riders a like, you can pick one up for over $10,000, the limited-production road-going version wasn’t terribly different from the 250GP World Championship bikes that factory teams were racing. A topical reminder, if we do say so ourselves…

So how do you improve upon such a great machine? Ask the folks at TYGA Performance, who have been tinkering with NSR250R sport bikes since they opened in 2000. All that effort and expertise has culminated in the ultimate NSR250R, an M28, which will almost make you swear-off large-displacement four-strokes for the rest of your life.

Celebrating 25 years of MC28 Rothmans SP bikes, the guys at TYGA wanted to imagine what a Honda NSR250R would be like if they were still available, made with more modern technology and parts. A timely thought, as in 2015 we see the resurgence of small-isplacement machines on the motorcycle landscape. The downside of that of course is that the 250cc/300cc machines have been budget-spec street bikes, which may be good for new motorcyclists, but are only a halfway-measure for long-time riders who are looking for small, but fast, track weapons. “If there is a market for this type of bike is debatable, and I am not sure there is but in the car world, there are plenty of people who like smaller lighter cars such as the Lotus,” explained Paul Pearmain, CEO of TYGA Performance. “It is good to see the re-emergence of the 250/300 class but frustrating that the only models offered are budget ones and the specification well below that which was offered in 1994. I guess you could say, we sort of wanted to embarrass the manufacturers such as Honda who pass off their modern lightweight bikes as sports bikes. They have their merits but they don’t compare to the best of the bunch 20 years ago!” For the spec-sheet racers, the TYGA-spec NSR250R makes a screaming 75hp (almost double the stock figure), thanks to a 300cc big-bore kit, with some additional porting.
Additionally, all the weight-saving pieces have brought the ready-to-go with fuel wet weight to a tune of 115kg (253 lbs).

Technical Specifications of the 1994 Honda NSR250R MC28 by TYGA Performance: